Is Growth of Daesh due to Fall of Nation States
Sam Ghandchi
http://www.ghandchi.com/1046-daesh-nation-states-english.htm

In the last three decades with the growth of globalization, the importance of national states has continuously weakened in the world. Also in the past fifteen years, Islamist terrorism has had a strong growth in the world (1).

The press have repeatedly discussed the issue of US attack in Iraq and noted the disintegration of Iraqi state giving rise to the growth of Al-Qaeda's terrorism and then Daesh. But what we see with the lack of a nation state in Iraq after the war is a more general issue that basically the nation states in the world have weakened and this was the road for those currents seeking "world government" including those wanting it with the model of Caliphate, to gain strength. For example, simultaneous with fall of the Soviet Union, the Islamist forces in Afghanistan grew and this trend in different parts of Russia and former Soviet Republics is continuing to this day.

The attempts to bring back the strong authority of nation states of Industrial Society which showed itself with the American and French Revolutions, is not practical with the current economic reality of the world and global political solutions are the way of the future. United Nations can be a small part of such endeavors (2).

Surely if the progressive forces of the world cannot create new alternative ways of governance in this era of globalization, the backward forces such as Daesh will fill the void by offering their Utopian alternatives of returning to the past (3). 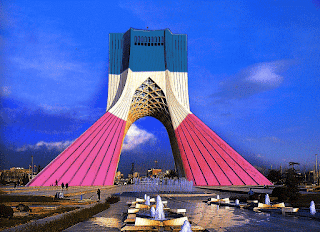 From NY to Paris, 15 Years of Terror
http://www.ghandchi.com/1043-ny-to-paris-english.htm

Is Growth of Daesh due to Fall of Nation States
http://www.ghandchi.com/1046-daesh-nation-states-english.htm

From NY to Paris, 15 Years of Terror
Sam Ghandchi
http://www.ghandchi.com/1043-ny-to-paris-english.htm

Fifteen years after the horrific massacre of Sept 11th in New York, yesterday, over 100 innocent people were murdered by Islamist terrorists in Paris. Condemning this heinous crime is not enough and we need to ask why the Islamist extremists have not been defeated after 15 years of human sacrifices and spending trillions of dollars in the wars of Afghanistan and Iraq.

No ideological war in history has been won solely by arms. Challenge of ideas confronting Fascism started long before the Second World War. Shortly after Sept 11th of 2001, it was discussed that we are dealing with an ideological war (1).

Why all that was done in Afghanistan and Iraq did not make a dent in this ideological war? Because protection in an ideological war is not secured by more guns, rather it is done by those who can offer to society, sound alternative ideas challenging the heinous terrorist views, addressing the issues that these extremists capitalize on to recruit ignorant followers.

We need to challenge Islamist terrorism by showing why modern futurism is an alternative to this dead-end reactionary ideology of Islamist extremists in our times (2).

1. From Salman Rushdie to WTC
http://www.ghandchi.com/87-aboutWTC.htm


Iran at a Crossroads
http://www.ghandchi.com/1041-iran-crossroad-english.htm

The regime ruling Iran, for the first time in 37 years, after signing the Iran Deal in Vienna cannot claim to be in danger of a foreign attack and the public opinion is now focused on the political, economic and social life of the people in Iran, and the way Islamic Republic of Iran is administering the country. The leaders of Islamic Republic of Iran, relative to the political opposition, are in a similar situation that Shah was in 1977 when the last opportunities for peaceful change were still possible but he did not agree to the liberal government of Shapour Bakhtiar till it was too late, and Khomeini's radicalism had already become the people's alternative for change in the country.
The demand for peaceful change in the Islamic Republic of Iran is not limited to the Islamist Reformers and includes the secular forces that have worked for peaceful change all these years. Not only Mousavi, Karroubi and Rahnavard have not been freed yet but all the endeavors of the peaceful seculars to change the beneficent supervision (nezarate estesvabi law) so that they can participate in the upcoming February 2016 election, have failed and if in the last year of the Shah, because of shortsightedness of the regime and lack of giving concessions to the peaceful change, Khomeini's radicalism became people's alternative, this time the radicalism of Mojahedin-e Khalgh Organization (MEK) is becoming people's alternative to Islamic Republic's regime.
The same way that before the revolution I clearly expressed my views about Khomeini's radicalism and Ayatollah Khomeini's supporters broke my nose, I have personally written my views clearly about MEK (aka MKO, PMOI) ten years ago in my book "The Futurist Iran" and I ask the readers not to think they know what the analysis is and please read it carefully in the link that is provided below (1). MEK is a Shia version of Daesh with all limitation of the scope of Shia Islam in the region. They were the only Iranian political group that supported Daesh last year when they seized Mosul (2). You can also see the latest attacks of MEK's followers against me that have been written a few days ago in Balatarin site at the link below (3).
The reality is that both the regime and Iranian people are at a crossroads today and with the increased suppression that Islamic Republic of Iran has started, everyday the MEK 's alternative for Iran is getting stronger.

It may be surprising why Sunni Arab states are more afraid of Muslim Brotherhood than the IS group, Daesh. For example, it was not long ago that Saudi Arabia and Qatar did not hesitate to support overthrow of Mohamed Morsi in Egypt. Whereas their support for war on Daesh in Syria has been dwindling.

It has been a long time since Muslim Brotherhood turned to nonviolent movement and they have a strong support not only in the old Middle Eastern countries like Egypt but in all Arab states of the Persian Gulf and are a direct threat to the Sheikhs who have ruled those countries in the last century. In contrast, although Daesh is a radical group that clearly has said it wants to overthrow all the Middle Eastern states, nonetheless, they lack the kind of grassroot support that MB enjoys in those same countries and are not viewed as much of an immediate threat by those states.

But if history is any proof, the leaders of Arab states of the Persian Gulf may be mistaken and Daesh may prove to be the real threat for all of them and beyond (1). Mongolian Invasion was thought by the heads of states of that era, particularly by Iranian dynasties as the most improbable event and they all were more busy fighting each other which shows in the way they responded to Moghols' first messenger, but we all know they were misaken and Mongols were the real threat not only for China and Iran, but for all the Middle East and beyond in Europe.

1. Why ISC did not Overthrow Assad
http://www.ghandchi.com/813-isis-saudi-english.htm